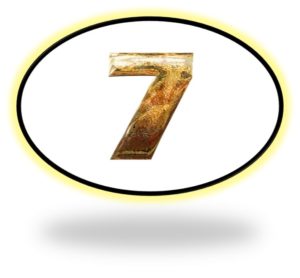 I had a dream recently that I knew was profound and timely for the body of Christ. In my dream, I had a priceless treasure locked away behind a door. I had to go away and knew that I would have to give the key to someone to be able to open the door at the proper time. This treasure was so valuable that I could not entrust it to one person alone. I had to entrust it to seven people. I gave each of them a WORD and told them that all the words given would be necessary to obtain the code that would be the key to open the door, and that it was not to be a simple construction of a sentence with the seven words.

The only way for the code to be revealed would be the seven of them working together – in unity – but it could not be superficial unity. This unity could only come from each person recognizing and honoring the gift of God hidden within each person. The code would only be revealed by working together to seek out the hidden treasure within each, the meaning of each word, with all of them having a different piece of revelation. They would be required to see the whole, through the combination of the seven times the seven different layers of revelation for each word given. This would take time and commitment to persevere together to unfold the key and unlock the door.

We are in the year of 5777, signifying grace and completion. I was immediately aware of the significance of the seven being completion, and of the truth of the body of Christ honoring one another; the need to work together as a whole (1 Cor. 12:12-27) and every joint supplying so that the body of Christ would be built up in exponential ways (Eph. 4:16). I sensed the Lord saying that this is key instruction for Kingdom manifestation in the earth. There are many that are not yet in position in the Kingdom, and there are many that are still in the world. The churches in the earth are at still at odds with each other in many respects, as well as the individuals with one another. There is a unity that must take place before the Kingdom can fully come.

As I pondered, I thought of the seven letters to the Churches in Revelation and the seven-fold spirit of the Lord, the seven mountains of influence. I asked the Lord for further understanding and sensed that there is much to be gained from recognizing that every member of the body of Christ (including those not yet born-again) carry a unique seed within of the spirit of the Living God, and each member also has weaknesses and strengths as those listed in the letters to the seven churches. We are to recognize that not one weakness in greater than another, and not one strength is less than another. Each has been given a measure of faith for the work that has been assigned, and the light within each of us is necessary for others to see. The full counsel of God can only come through every part bringing what the Lord has shown them.

I hear the Lord say, “This is the time, this is the hour, for the world to see my church in power. Yet there are many still lost and bound, seek them out that they be found. Look deeper and find the jewel within, look deeper than what seems their sin. All have fallen short of my glory, yet all are necessary for my story. I create beauty in each one; see them through the eyes of my Son. My children each supply a part for the whole, and the whole will increase as you extol each in their unique role. Do not be puffed up with pride, it cannot be in my pure Bride. All have been given a unique measure, and together become my priceless treasure. Recognize I am God alone, and I sit on the Heavenly Throne, yet My Spirit has been poured out on each one who carries the imprint of My Son. It is not for you to judge the hearts, go forth and find the missing parts.”

“I therefore, the prisoner of the Lord, beseech you that ye walk worthy of the vocation wherewith ye are called, With all lowliness and meekness, with longsuffering, forbearing one another in love; Endeavouring to keep the unity of the Spirit in the bond of peace. There is one body, and one Spirit, even as ye are called in one hope of your calling; One Lord, one faith, one baptism, One God and Father of all, who is above all, and through all, and in you all. But unto every one of us is given grace according to the measure of the gift of Christ. Wherefore he saith, When he ascended up on high, he led captivity captive, and gave gifts unto men. (Now that he ascended, what is it but that he also descended first into the lower parts of the earth? He that descended is the same also that ascended up far above all heavens, that he might fill all things.) And he gave some, apostles; and some, prophets; and some, evangelists; and some, pastors and teachers; For the perfecting of the saints, for the work of the ministry, for the edifying of the body of Christ: Till we all come in the unity of the faith, and of the knowledge of the Son of God, unto a perfect man, unto the measure of the stature of the fulness of Christ: That we henceforth be no more children, tossed to and fro, and carried about with every wind of doctrine, by the sleight of men, and cunning craftiness, whereby they lie in wait to deceive; But speaking the truth in love, may grow up into him in all things, which is the head, even Christ: From whom the whole body fitly joined together and compacted by that which every joint supplieth, according to the effectual working in the measure of every part, maketh increase of the body unto the edifying of itself in love.” (Eph. 4:1-16, KJV)

I WILL FILL ALL LACK; DECLARE MY GOODNESS! THE TUNNEL BECOMES THE FUNNEL