RECEIVE MY FORM IN THE STORM 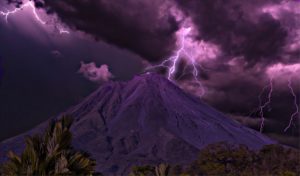 RECEIVE MY FORM IN THE STORM

I had a vision during worship a few weeks ago that I thought at first was just for me, as I have been going through many storms. Holy Spirit has been giving me more understanding of what it means and impressing upon me strongly that it is not just for me, that many in the Body are in a storm or will be entering a storm.

In the vision, the Lord appeared to me and was gazing upon me in love. He came nearer, bent down to me and kissed me on the cheek. He then turned to leave and beckoned me to follow Him. In the Spirit, I heard Him say, “Will you come with me?” My heart immediately leapt, and my body followed. How could I not follow the One who satisfies my heart, in Whom is my life?

We began to climb a mountain. It soon turned into a steep and rocky crag. In the vision, it was impressed upon me that there was no room for carrying extra weight; everything unnecessary must be released and left behind.

The higher we went, the more difficult it became. My thoughts became filled with how hard it was, how desperately I needed water; even taking a breath became a challenge. My thoughts soon became focused on only one thing – staying close to Him. When I looked at Him, I no longer needed anything else, His breath became mine and my thirst was quenched.

The sky was becoming darker; I could see a storm just ahead of us, at an even higher elevation.  The Lord turned to me and asked, “Will you follow me into the storm?” My heart responded yes again, and soon the storm enveloped us. It was cold and the wind was fierce; I held onto Him for dear life. The storm grew into a tempest and I could not see anything around me at all. I could hear the howling wind and knew that everything in its path was being shaken.

In the next scene, there were lightning bolts being shot to the ground. Where they hit, fires started. The Lord turned to me and said, “In this storm, you have received my form; as you became one with Me, you became infused with power. I will send you forth and wherever you are sent, My power will be released and strongholds of darkness will be shattered. My Spirit will be released in power and transform, many souls will be reborn, My life in them will begin to be formed.” Then it ended.

Over the next days and weeks, Holy Spirit kept bringing me back to this vision, reminding me of other visions I have had of His people being formed into arrows. He led me to Zechariah 9:12-17.

“Turn you to the strong hold, ye prisoners of hope: even to day do I declare [that] I will render double unto thee; When I have bent Judah for me, filled the bow with Ephraim, and raised up thy sons, O Zion, against thy sons, O Greece, and made thee as the sword of a mighty man. And the LORD shall be seen over them, and his arrow shall go forth as the lightning: and the Lord GOD shall blow the trumpet, and shall go with whirlwinds of the south.” (Zechariah 9:12-14 KJV)

According to Strong’s Concordance, the root word for Judah can mean to shoot arrows and also to praise; Ephraim is double fruit. There is a strong remnant in the Body of Christ, joining together in unity outside the walls of the organized church structure (raised up thy sons, O Zion) – the true sons, those desiring to be set apart for Kingdom business), living to bring praise to His Name. The time is at hand; in the storm we have been formed as arrows in His hand and will go forth as lightning. The Lord is rendering double to His people. Not only have we the reward of righteousness, but the reward of the double in spoils for what the enemy has done.

“For your shame [ye shall have] double; and [for] confusion they shall rejoice in their portion: therefore in their land they shall possess the double: everlasting joy shall be unto them.” (Isaiah 61:7 KJV)

I sensed Holy Spirit impressing upon me to look up lightning.  I found that lightning is caused by negative and positive energy colliding, and sensed by Holy Spirit that we are reaching the apex of evil and good colliding. Evil is reaching its fullness, and the sons and daughters of the Most High, filled with the Spirit of God, are coming forth in their fullness. Lightning is 53,000 degrees; 10 times hotter than the sun! I believe this is symbolic of Jesus of the greater works that He said we will do, as we are baptized with fire from on high. When we hold on to Him in the storms, we receive this power!  The time is at hand for His people to take the land. I heard, “For as evil is reaching the fullness of measure, My people, my peculiar and priceless treasure, are being formed into weapons with precision of skill and hearts committed to perform my will.”

“But in the fourth generation they shall come hither again: for the iniquity of the Amorites [is] not yet full.” (Genesis 15:16 KJV)

“And I heard another voice from heaven, saying, Come out of her, my people, that ye be not partakers of her sins, and that ye receive not of her plagues. For her sins have reached unto heaven, and God hath remembered her iniquities. Reward her even as she rewarded you, and double unto her double according to her works: in the cup which she hath filled fill to her double.” (Revelation 18:4-6 KJV)

As you climb higher in elevation in the natural, all excess baggage has to go. Added weight hinders our ability to breathe at high altitudes! To climb higher spiritually, we need determined focus to lay aside all those things that hinder us and distract us. I heard, “Everything you think you know, for higher ground you must let go. Be in sync with me, step by step; you will be filled with My thoughts as I give you My breath.”

Are you in a storm? In the storm you become strong, endurance is formed. There are multiple Biblical examples of God using storms to shake off the old and form the new. We see it in the natural also. Storms come and the dead things are blown away, trees not deeply rooted are toppled.

I hear the Lord saying, “Press in close, hold tight to Me, let all else go; be set free. You said you would gladly follow me. Come with me, be filled with power; it is needed in this hour. You have prayed to be transformed; change will come from Me in this storm. I am forming my weapons, for the day is at hand; you will go forth in My power and possess the land.”

GO LOWER, COME UP HIGHER; SHAKE THAT SNAKE OFF INTO THE FIRE ADVANCEMENT TO THE IMPLACABLE, THE AUDACIOUS AND THE EAGLES