I WILL FILL ALL THINGS; DECLARE MY GOODNESS! 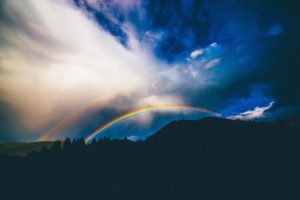 We are clearly in a war, but we know that the victory is ours, and I am so thankful that many new strategies are being released! Holy Spirit has been bringing new revelation to a warfare strategy He showed me last year….”When you see lack and negativity, declare My goodness.” What He is saying today is, “I will fill all things; declare My goodness.” At first glance, it doesn’t seem very different, but He brought to mind these scriptures:

“He that descended is the same also that ascended up far above all heavens, that he might fill all things.” (Ephesians 4:10, KJV)

“And He is before all things, and in Him all things consist.” (Colossians 1:17 NKJV)

This is a year where God wants His goodness to fill all things. The earth is full of the goodness of the Lord (Ps. 33:5) but we don’t always see it. The enemy brings distractions and circumstances that scream negativity and lack.  God wants us to both see His goodness, and declare His goodness. In this year of birthing, fruitfulness and abundance, what we speak is critical. I have been seeing acceleration in manifestation of what I speak!

“And the LORD passed before him and proclaimed, “The LORD, the LORD God, merciful and gracious, longsuffering, and abounding in goodness and truth,” (Exodus 34:6 NKJV)

The Bible is filled with scriptures exhorting us to give thanks to the Lord for His goodness….too many to list here, but it is clear that He wants us to focus on His goodness! This is a year of new wine, and Jeremiah 31:12-14 tells us when we stream to the goodness of the Lord for wheat and new wine and oil, our souls will be like a well-watered garden, and we will be satisfied with His goodness! Ps. 23:6 says that mercy and goodness follow us all the days of our lives. Goodness is following us; turn around in your perception (which is what repent means – think differently) and see it!

“[[To the chief Musician, Maschil, [A Psalm] of David, when Doeg the Edomite came and told Saul, and said unto him, David is come to the house of Ahimelech.]] Why boastest thou thyself in mischief, O mighty man? the goodness of God [endureth] continually.” (Psalm 52:1 KJV)

“Now the God of hope fill you with all joy and peace in believing, that ye may abound in hope, through the power of the Holy Ghost. And I myself also am persuaded of you, my brethren, that ye also are full of goodness, filled with all knowledge, able also to admonish one another.” (Romans 15:13-14 KJV)

When you look up the word admonish in Strong’s Concordance, it means exhortation or warning, deep in the root structure that forms the word, it means to set forth, ordain and establish. God doesn’t fill us with all goodness and knowledge just so we can feel better about ourselves; we are build His Kingdom by releasing His goodness and knowledge! (Rom. 15:1-2)

Plant seeds of truth that God is good and declare His goodness in every area of lack that you see; stay in faith and watch the birthing unfold. Where you see sickness, poverty, need of any kind – turn around; goodness and mercy are following you! Receive them and declare them in your situation. God wants to be known and glorified in the earth. We are in a war and the enemy has overplayed his hand. I have had attack after attack and know so many others have too. The plans of the enemy are becoming too obvious now! Are you fainting in weariness?

“[I had fainted], unless I had believed to see the goodness of the LORD in the land of the living.” (Psalm 27:13 KJV)

Recently, I had two specific attacks in direct relation to prophecies I had received. The second brought a manifestation that was hard to rise up over in faith. I was saying all the right things, but not really believing them. I had to believe the promises of God, the life of Christ in me and His authority over sickness, in order to declare His word IN FAITH. Within a few hours the situation changed.

We have to war over our prophecies and every promise we have received. Let our eyes be opened to the truth of God’s goodness and faithfulness to His Word; turn around, believe, then step out IN FAITH and declare His goodness!

MOMENTOUS MOVEMENT AND TURNAROUND! I HEARD, “FOUR QUADRANTS; THE PLUMB LINE HAS DROPPED, LEVELING HAS BEGUN”