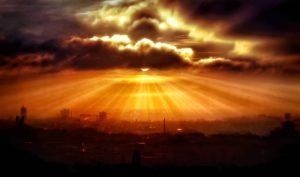 During a time of corporate worship, the heavens were opened. As I saw things, I sought the Lord. I believe what I heard is not just for me and will encourage many in the Body of Christ.

First, I heard a distinct sound of a heartbeat and heard, “Your worship during recent storms has wrought a great deliverance. I have seen your intercession and faithfulness; you have touched My heart. There is now a shift; an outpouring has begun. The sound has come forth and even as a shift in weather patterns causes a shift in nature, so shall this shift cause movement in the spiritual atmosphere and catalytic changes shall occur in circumstances that seemed hopeless.”

In the spirit, I saw an angelic host worshipping with us and heard, “I am releasing reinforcements; many of you have been standing strong in faith, warring in intercession and declaring My word, but you have grown weary. I am sending fresh fire, fresh wine, fresh oil of My presence. What has seemed to take years is now suddenly shifting. The intercession of the ages has collided with the timing of My purposes and NOW prayers are answered; NOW the vaults of heaven are opened; NOW prodigals are turning toward home; NOW the lost are being found; NOW favor, advancement and promotion – the doors are opening. Rise up in the strength of the knowledge that reinforcements are released, and even now I’m sending a fresh wave of glory that you may run! I am setting order to those situations where chaos and destruction have seemed to reign.”

I declare spiritual eyes opened to see the angelic forces are surrounding you. Our God is Jehovah Sabaoth – the Lord of Hosts! The angels respond to His Word (Ps. 103:20) and are ministering spirits sent to the heirs of salvation (Heb. 1:14)! Even as Elisha prayed for his servant’s eyes to be opened, I pray and decree that your eyes be opened to the angels that have been released to fight for you!

“And Elisha prayed, and said, LORD, I pray thee, open his eyes, that he may see. And the LORD opened the eyes of the young man; and he saw: and, behold, the mountain [was] full of horses and chariots of fire round about Elisha.” (2 Kings 6:17 KJV)

Later in worship, I saw the Lord standing in the midst of the glorious host of angels. He removed His robe and threw it over us as a blanket. I heard, “I have covered you with the robes of righteousness from the blood of My Son. I am reminding you of My great covenant of mercy and grace. I am reviving those who are weary; declare My mercy and grace are your covering, know that in the midst of turmoil, Holy Spirit is hovering.”

The next morning I woke at 5:55 and the Holy Spirit reminded me that number five represents grace, goodness and favor. His mercy and grace follow us all the days of our lives and this is the season of the new – spiritual eyes are being opened to see a greater depth of His grace, goodness and favor! He is limitless, full of grace and mercy! He is releasing reinforcements in the angelic realm and also in the natural. You will see an opening of doors, favor and help in the days to come. God is orchestrating a great move of His Spirit in the earth and the enemy is raging. The warfare has been intense, but the tables have turned.

I personally have witnessed a miracle in recent days in my family where God intervened. The doctor’s report brought fear and hopelessness, but with God nothing is impossible (Luke 1:37). God moved and SUDDENLY the situation was reversed! I know that many are afraid to get their hopes up lest they be disappointed, and that sounds reasonable, but our reasoning can get us in trouble, bringing discouragement and hopelessness and gaining nothing because we are double-minded (James 1:6-8)! Faith arise! There has been a shift and God is sending reinforcements! Take on courage; let hope rise up!

“Now the God of hope fill you with all joy and peace in believing, that ye may abound in hope, through the power of the Holy Ghost.” (Rom. 15:13 KJV)

Do not lose faith, what God has promised He will bring it to pass. Lay hold of hope; enter through the veil of unbelief into His Almighty Presence and you will know that ALL THINGS ARE POSSIBLE WITH GOD!

“Which hope we have as an anchor of the soul, both sure and stedfast, and which entereth into that within the veil;” (Heb. 6:19 KJV)

Be a prisoner of Hope (Zech. 9:12), not a prisoner held captive in fear and unbelief by the lies of the enemy! God is releasing reinforcements and stirring your heart once again by the power of the Holy Ghost!  The Ruach breath of God is even now bringing revival to your spirit; fresh oil and fresh wine are your portion in the days to come!

link to Alane Haynes website
link to Amazon page
YOU WILL NOT BE CURTAILED, FOR I HAVE PREVAILED; THE LORD THY GOD IN THE MIDST OF THEE IS MIGHTY! I HEARD, “I AM DELIVERING THE ENEMY TO YOU!”