Recently, in a time of seeking the Lord, I asked the Lord what He would say, and I heard, “a sound of abundance of rain.”

In 1 Kings 18, Elijah told King Ahab that there was a sound of abundance of rain. Sound in the original language means a noise or a voice. This was a word from the Lord that Elijah had been waiting for, it signified the end of a period of drought. Three and a half years prior, Elijah had prophesied to King Ahab that there was a drought coming, because he and the people of Israel had ceased following the Lord. 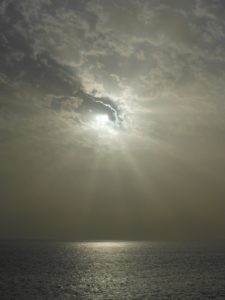 One of the meanings of drought is sword. When the word of the Lord comes to divide, it is to cut off ungodliness and allow His Lordship to reign. The people of Israel had been under the sway of evil, following the false prophets of Baal. At the Lord’s time, Elijah came to bring the other edge of the sword. This was the showdown between the Lord and Baal. God showed Himself to the people as the One True God and the prophets of Baal were destroyed. The people’s hearts were restored to the Lord. During drought, the sword is doing the work of cutting out ungodliness so that the false in us (all the lies of the world, the flesh and the devil) can be “showed up” by God.

It is when our hearts are turned fully to the Lord that the fullness of His presence – His reign bringing His rain – comes again into our lives. When we hear a sound – the voice of the Lord telling us that there is the fulfillment of a prophetic promise at hand – we must continue in prayer and faith until we see the manifestation.

Elijah positioned himself in prayer, and sent his servant to go look toward the sea. His servant went and came back after seeing nothing. Elijah told him to go again seven more times, until he came back saying he saw a cloud the shape of a man’s hand.

“Servant” in this verse means tumble, shake, as a lion’s mane shakes when he roars! The root of the word “sea” also means to roar.

When we are going on in faith on God’s word (a sound of abundance of rain), we have to shake off doubt and unbelief; we have to rouse up our faith and let the Lion of Judah – the Spirit of Christ within us – ROAR from the Spirit into the natural until the time of the completion of the word – seven times signifies that process.

Your voice is your servant. It is by speaking our voice in faith that we are sending our servant forth into the atmosphere of our circumstances, declaring that we believe God’s word and will continue believing until we see the manifestation of that word.

Go again! What the Lord has said to you is true and will come forth. The enemy comes to bring doubt and fear, to cause you to speak forth words of doubt and deny your faith in what God has said! Deny the enemy any ground in you! Does it seem hopeless, based on your circumstances? Go again!

Your voice is your servant. Remember what the Lord has said; hear the sound of abundance of rain and rouse your faith! Send your words forth and declare the promises He has given you; bring them forth with the lion’s roar until you see the cloud the shape of a man’s hand. The hand represents power. God is waiting for us to agree with Him and use our words as seed. The rain will come to water the seed and bring it to fullness!

Is our God not a God who can perform what He has spoken? “So shall my word be that goeth forth out of my mouth: it shall not return unto me void, but it shall accomplish that which I please, and it shall prosper in the thing whereto I sent it.” Isaiah 55:11, KJV

I hear a sound of abundance of rain! Go again! Rouse your faith and roar from your spirit into your circumstances until you see the power of the Lord in your life! This is a time of His appearing; the rain is coming! Let Him reign!

Impenetrable Fortress A Season of Suddenlies