On December 24, (Christmas Eve/beginning of Hanukkah), I was relaxing in the living room with a fire in fireplace. It was a very cold, rainy and windy day. My gaze turned toward the back yard, as it often does, as we have a beautiful elm tree that central to our garden. I noticed that the lowest branches seemed lower over the fence line than they had been, and I felt fear grip my heart. I went outside to investigate further, hoping that I was mistaken.

I know my yard – every tree, every flower, the way the light shifts shadows at different times of day, the length of the branches as the tips stretch towards the canyon. One of the first things I do each day, before the dawn breaks and the first birdsong is uttered, is go onto my porch and cry out to God. I stand there in the dark and declare that Jesus Christ is Lord, to the Glory of God the Father. I know my tree.

My scrutiny continued, this time estimating the distance between the top of the tree and our awning. To my shock, the tree had listed toward the canyon by at least two feet. I went into the yard and upon closer examination, saw that the point where the trunk meets the base of the tree in the ground had a large crack. In addition, a foot away, there was a gap in the soil that was parallel to the tree’s base and I could see a separation where the tree was being uprooted by the wind.

I called the manager of our park and she called the tree service. Christmas Eve!!! He called me and told me it would be an hour. By the time he got here, the tree was another two feet towards the canyon. He trimmed off much of the weight on the canyon side, so that it wouldn’t topple over and take out the fence, and it shifted back substantially. It was very weak at the base, though, and more rain and wind was forecast for later in the week. He advised that the tree would most likely have to be removed. I was heartbroken. I was thankful that he and his helper were willing to come out on Christmas Eve!

I spent much of Christmas despondent and teary. I loved this tree; it was one of the reasons we chose this location. Our tree brought so much shade in the summer; birds of many varieties would come for seeds in the fall and shelter year-round. The tree brought privacy to our home and beauty of dappled sunlight to our yard. I was heartbroken. “Why would you let this happen, God?????”

Over the next few days, I became adjusted to the reality that the tree would be removed. I knew that I would always be wondering and fearing when rain or wind were forecast, and the reality of rot setting into the crack was real. I was reminded of my prayers, that everything God had not planted to be uprooted, and all that He plants to remain. I couldn’t make sense of it.

The day came too soon. Little by little the branches were removed until all that remained was a small stump. It looked like devastation had come to my yard. In addition, I wasn’t feeling well physically and there were things going on in my family that were causing emotional upheaval as well. I was feeling a great deal of self-pity and trying to make sense of this loss. I was in prayer constantly, but the heaviness of loss and pain was so real that I wasn’t hearing anything. I sensed a great heaviness from the tree-trimmer as well, and began talking to him. He was in a lot of pain in his knees. I asked if I could pray for him and he was very thankful. His countenance changed and became much lighter as he received a touch from the Lord. I was thankful that some good came from this event, yet was still very disheartened personally. 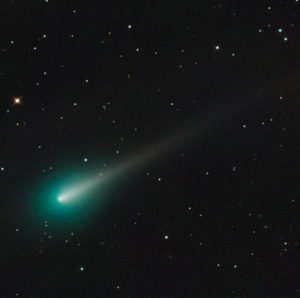 New Year’s morning I sat on my porch pre-dawn and sought the Lord. As I was seeking, praying and declaring His Lordship, a green meteor appeared from the east in the distance and I watched as it drew across the expanse of sky over my head and to the west. I was amazed. It was the first I had ever seen. I heard the Lord say, “This is the first of what will be many supernatural occurrences. You will see and hear things you have never before seen or heard. I am expanding your horizons, your perception and your seeing and hearing and you will be amazed.”

We ministered at our convalescent home morning service a few hours later. Two people received healing. In the afternoon service, which is a very small group, we had a very intimate time of fellowship and sweetly serving one another. It was so sweet that we all stayed way beyond our normal time.