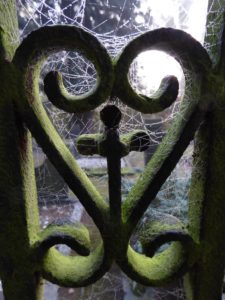 The Lord has been speaking to me about the enemy at the gates, tactics used to keep us from our promises, and He is highlighting offense. I heard Him say , “I am releasing eyesalve in the spirit to allow my people to see correctly and dismantle the fence of offense. Offense is a defense based on pretense, and causes division at great expense.”

Eyesalve is only mentioned in Rev. 3:18, where Jesus tells us to “anoint thine eyes with eyesalve, that thou mayest see. As many as I love, I rebuke and chasten: be zealous therefore, and repent.” [Rev 3:18-19 KJV]

Strong’s Concordance defines eyesalve as a preparation used as a remedy for tender eyelids. The root word means to fasten firmly together; to join one’s self to, cleave to. I asked the Lord how it relates to dismantling offense. What I heard in response is that there are areas where we are so tender, “touchy,” that our perception of what we see is often incorrect. The eyesalve Jesus wants us to use will allow us to see correctly when we are offended, break the spirit of division and allow the Body to be joined in unity.

We know how important unity is to God, and how the enemy loves to divide. Our adversary is well aware of the timing of God and ensuing Kingdom advancement, and will use many tactics to hinder us from going forward. Offense is one of his favorite weapons, and we can certainly see it being used in every realm of society!

In recent months, I have been experiencing more opportunities for offense than during the whole of last year! Normally I shake offense off pretty easily; in fact, I often said that I am not easily offended. I learned years ago that offense blocks the anointing. As I was now experiencing daily opportunities to be offended, I asked the Lord why this was happening. He chose to give me an object lesson.

I noticed that I wasn’t “hearing” acutely like I usually do; in fact, it got to the point where I wasn’t even interested in trying to spend time to hear. I was doing ministry, and God was answering my prayers for others, but personally I wasn’t hearing anything. When I realized this I became concerned and really sought Him. He woke me the next morning at 2 a.m. and I heard, “You can’t hear if your heart is hardened.”

This puzzled me. My heart wasn’t hard; He must have been telling me this cute little phrase for someone else!  I needed clarity and looked up scriptures on offense.

Those are strong words; whatever offends, get rid of it! The Apostle Paul even goes so far as to say that if eating meat would cause a vegetarian to stumble, he’d forgo the meat!  (1 Cor. 8:13, my paraphrase) Why is it so important? Isn’t offense just a little indignation? How is that so bad compared to other sins, right?

The dictionary defines offense as: illegal act/rule-breaking; or, annoyance or resentment brought by perceived insult to or disregard for one’s self, standards or principles.

According to Strong’s Concordance, offense can mean annoyance or resentment, but there is more. It can also mean a stumbling block/snare placed intending another to trip and fall, to: a) entice to sin b) cause a person to distrust and desert one whom he ought to trust and obey, causing to fall away; c) be offended by seeing something in another that I disapprove of and that hinders me from acknowledging his authority; d) cause to judge unfavorably or unjustly.

How can we do that when we feel hurt or angry, when we feel justified being offended? We are to trust God as the lawgiver, the judge and enactor of justice. “Great peace have they which love thy law, And nothing shall offend them.” [Ps. 119:165 KJV]

God desires to increase His government in the earth, and His government must be increased in us first. We are instruments of blessing, trusting GOD to judge justly. He is the One who knows all things, and to whom all must give account. It isn’t about others when we get offended. If we are truly wronged, God will vindicate, in His timing and in His ways (perhaps after we learn what we need to learn).

Most of our offenses are because of things we make up in our head! As I heard the Lord say, “It is a defense based on pretense, and causes division at great expense.” Defenses are strongholds of pride formed from heart issues – roots of inferiority, insecurity, bitterness, unforgiveness, etc. When we get close to the gates, the enemy brings an offense causing “self” to rise up – our feelings, desires for recognition, wanting to be “right.” Or it might be our opinion, a pre-conceived notion of how things should look, what we “deserve,” etc. Self rises as a defense guarding heart issues.

As I was pondering these things, I saw in the spirit many people enroute to their personal gates of promise. Along the way they were picking up pieces of fencing and erecting a structure that surrounded them as a cage. They were not aware that this was blocking them from entering their gate; they were blinded by the structures they built. The Lord told me that this was what offense does. It builds a structure hindering vision and blocking access!

The Lord told me that offense is one of the main tools the adversary is using in this season to keep us from moving into our land of promise, the fullness of destiny in Christ, that the enemy is trying to keep us from going through our new gates. God allows this; He will reveal the trickery so that we can correct our vision and overcome!

When I read the Strong’s definition, Holy Spirit convicted me and showed me where I became offended in recent ministry. I had formed opinions regarding a leader and reasoned they shouldn’t be in leadership because of it; I was judging them! I was placing my judgment in higher position than His, hindering my accepting their authority! I immediately repented and took action to bless that person. My hearing returned with even greater clarity than before, my spirit was renewed and on fire with hunger again, and in the course of a few days, God opened doors, divine appointments to increase my realm of influence and authority for His Kingdom!

The enemy uses offense to cause us to stumble, but when we repent and allow the Lord’s eyesalve to correct our vision, He realigns us, His government in us increases, and we ascend higher! No wonder offense is such a favored weapon of the enemy, and Jesus speaks so strongly about it! Praise God, He is releasing eyesalve so that we can see offense and dismantle it! He is increasing focus and clarity in our sight, for full alignment to His ways, His order, His authority and His timings.

What about when we are offended seeing the wrong done to others, things that are evil and should offend us! Maybe we say, “I can’t believe they would do that; somebody needs to speak up or do something!”  God may be raising some to speak up, to be His mouthpiece of justice in the earth. Some might be offended by being put in that position, there may be a structure of unwillingness to be a mouthpiece of correction, an arbiter of justice in the earth; or may simply not want to have their lives interrupted. God’s Kingdom is more important than ours or others’ feelings, and it is not “politically correct!” To some, God is saying, “See something? Say something, in My Spirit through love, for they know not what spirit they are of! Be shrewd as a serpent and gentle as a dove; bring my Kingdom to the earth with wisdom from above.”

There are battles in the world arena that must be fought in the spirit. It is time to come up higher in the realms of spiritual warfare, to press in and hear the strategies of heaven and, in His authority, decree and declare to enact God’s Kingdom in the earth! Some might be offended and resent that God would put that kind of a demand on us, like rebellious children not wanting to take on the next level of responsibility. God is providing great grace for the task at hand, to enable us to rise and take the land!

The fence of offense is being torn down. Right now, Holy Spirit is shining His light on areas of offense in the hearts and minds of the Body of Christ! I heard the Lord say, “Many are offended in Me because they don’t see Me in others. They see the differences and allow division in their heart because they do not value diversity, the uniqueness of design in each of my children. They do not have their vision opened to perceive the glory that will come when each part is in place and functioning, for the release of the full measure of the stature of My Son in the earth. This has caused blockages, arteriosclerosis of the spirit, and I am doing surgery right now!”

This is the hour we need purity of heart for clear vision to see what God is doing, and to discern the tactics of the enemy! God is developing sharpshooters in the spirit, so that we can take accurate aim at the enemy’s plans and advance the Kingdom of God!

I hear the Lord saying, “Many are offended because they don’t know their true identity. They have a defense built on pretense because they don’t know who I have created them to be. Now is the time for all to see that their true identity is found in ME! I am releasing my eyesalve to expose the fence of offense, to break down structures of defense based on pretense. Let My Spirit search the heart, and fences of offense will break apart. The time is now for all to see their true identity is found in ME. From this will come the unity that has been my design from eternity.”

EMISSARY ALERT – SUBVERSION AND SHORTCUTS! STEP INTO THE NEW!