CAPTIVES WILL BE SET FREE! 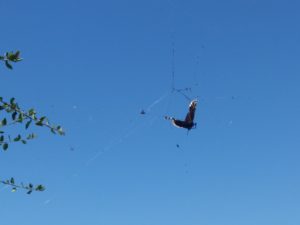 CAPTIVES WILL BE SET FREE!

The Lord often speaks to me in the natural about what is coming in the spiritual, and the other day I experienced one of those things.

I was on a walk with my grandson at a nearby Nature Center. He said, “Grandma, look!” and pointed up. About 2 feet above my head was a huge spider web with a beautiful blue, black and white butterfly trapped in the middle. I was so sad, certain it was dead. Then I was struck with the thought that it might not actually be dead, just trapped in the web. I didn’t know what to do. I was afraid that if it was alive and I tried to get it out, I might kill it in the process, but I had to try.

Praying for God’s help, I got a few sticks and pulled down the spider web. I painstakingly maneuvered the sticks, trying so hard not to touch the wings. As I tried to remove the web from the wings, sometimes the wings’ sections were stretched and I was fearful they would pull apart, so I had to carefully adjust the sticks to try another way. The butterfly was fluttering; it was alive!

Eventually I removed as much of the spider web from the butterfly’s wings as possible with the sticks. There was a small piece of spider web still stuck around a tip of the wing that was impossible to get off with the sticks. The butterfly tried to fly and landed in a nearby bush structure (a mock hut built to depict the earlier Native Americans’ lodging). I couldn’t tell if it was just resting or couldn’t fly. I took a stick and gently touched the edge and it fell to the ground, trying to fly but unable.

Now I was really worried. I had to touch the wing and get that last piece of spider web off. I had been taught that you cannot touch butterfly wings or the oil from your hands will render it unable to fly. There was no other option. I felt so strongly that I had to do this and see the butterfly set free. I couldn’t go this far and have it die!

My grandson yelled to someone else to come and help, but they didn’t know what to do either. Praying, I gently touched the wing and pulled the last piece of web off. It flew! It circled me, then landed on my right shoulder, then flew off! I was amazed, astonished and astounded! Blessed with setting this beautiful creature free, and nearly in tears with joy.

I believe this is the season we are in. The butterfly seemed dead, beyond help. There are people that others have given up on; that seem beyond hope. There are people that were soaring in their transformation that became ensnared by a trap that was set! Don’t be blinded by what you see in the natural! It isn’t always as it seems! Maybe it is your own situation that seems hopeless! Nothing is impossible with God! (Luke 1:37; Matt. 19:26)

If He is impressing upon you the faintest glimmer of hope, or you get a seemingly ridiculous thought of something to do or say, step out in faith! If He tells you to do something that seems ridiculous or impossible, do it anyway!

Naaman thought it was ridiculous to step into muddy water to be healed (2 Kings 5:1-19) and I think I might have some doubts if the Holy Spirit told me to spit into mud and place it in a blind man’s eyes (John 9:6). There are so many accounts of miracles in seemingly impossible situations, with instructions that make no sense to the natural mind. Hebrews 11 is chapter of encouragement to walk in faith, and the prompting of Holy Spirit is our assurance and guarantee that we will see results! Now faith is the substance of things hoped for and the evidence of things not seen! (Hebrews 11:1)

As we see others trapped in bondage and our hearts are touched to see them set free, God will move upon us through the prompting of the Holy Spirit with divine strategies, to do things that seem ridiculous to our natural mind or beyond the understanding of human reasoning or instruction. As we move out in faith beyond what we have been taught, taking those steps that seem impossible to our mind, it will be the very thing that will cut the cord of bondage and see the captive set free!

JESUS REVEALS OUR HEARTS I WILL FILL ALL LACK; DECLARE MY GOODNESS!